Photovoltaic (PV) module manufacturers, installers and project owners share a common interest in the long-term performance of PV installations. In evaluating the reliability of a PV system, it is important to focus not just on the PV module but on the entire system. An installed PV system can provide the expected level of service only if all of its components, from the solar cell to the connection to high voltage transmission line, perform as expected, and if the entire PV system is properly maintained.

Specific properties of PV system installation sites, such as ambient conditions, equipment temperatures, soiling and contamination can also have a direct impact on the performance and expected life of a given installation, and can contribute to different site-specific degradation rates. In addition, the ongoing consolidation of the PV industry may result in the demise of some manufacturers, undercutting the potential benefits of manufacturers’ warranties. To avoid these problems, PV manufacturers should adopt a holistic quality control protocol to address key issues such as sampling rates, test plans and test durations.

This white paper discusses various testing methods that can be used by manufacturers and customers to assess the reliability of PV modules in real-world conditions. It reviews the importance of both module durability and reliability in PV system performance, and discusses the drawbacks of theoretical models of life expectancy in assessing module reliability.

It then presents a framework for assessing module PV reliability and illustrates how three different tests can provide meaningful module reliability data in the context of an ongoing quality inspection program.

The task of modelling the lifetime or lifetime cycles of PV modules is based on a number of assumptions. These assumptions are combined with lab-measured data and, to some extent, information from field experience and product returns from the field. However, the photovoltaic industry is relatively new, rapidly changing and focused on increased efficiency, i.e., higher efficient cells, new materials, new designs, etc. In contrast, PV lifetime expectations can range from 20 to 30 years. These factors significantly limit the availability and value of data that can be used today to predict expected PV service life.

To answer important questions regarding PV modules’ service life, accelerated aging test protocols are often used. From these tests, activation energy (Ea) can be determined by using an Arrhenius-approach. Typically Ea measurements for temperature, humidity and ultraviolet (UV) are identified and used for first life time prediction calculations.1,2,3,4 Eas, combined with local weather data, provide the basis for those calculations of an anticipated service life.

However, the basic problem with this approach is that it relies on the triggering of a single failure mechanism only. In reality, a combination of different concurrent degradation mechanisms occurs, along with random and location- specific weather-related events (wind, wind gusts, storms, snow, ice and hail) that are nearly impossible to predict.

Figure 1 illustrates different observed power loss curves for an assortment of PV modules (dotted lines), together with possible step-warranty curves (blue and orange lines). The green and red curves shown are arbitrarily-combined degradation curves, with each curve the result of three separate factors. The key question posed in this illustration is which of the two step-warranty curves (the orange or the blue) more closely aligns with actual lifetime performance.

To improve on the theoretical approach for estimating PV lifetimes, it is necessary to understand the interaction between various environmental conditions and the observed impact that each of these conditions has on PV modules. This requires the collection of performance data from various locations, and an analysis of the data to determine possible root causes for failures. Table 1 lists various environmental parameters and displays some observed affects that result in PV module failures.

The durability of a PV module is a byproduct of its design. PV module reliability, on the other hand, is dependent on the quality and integrity of the process used to manufacture the module. Even small variations in material quality or manufacturing processes can impact the reliability of a component.

Testing and certification of a PV module to the requirements of a given standard typically focuses on verifying that the fundamental design requirements have been fulfilled. A different battery of long-term stress tests and test-to-fail protocols have been proposed to verify the durability of PV modules.5, 6, 7

It is often assumed that such long-term testing also assesses the reliability of a PV module, but reliability testing verifies that a product has been consistently produced within the original design parameters. Reliability testing increases confidence in production quality, and usually takes less time and costs less than durability tests.

To be effective, reliability testing requires checking more than just one or two samples. An industry-based standard, such as ISO 2859-1,8 can provide guidance on how to select and evaluate production samples, as well as the criteria that can be used to determine whether a batch of tested products should be accepted. Based on an actual history of sample acceptance and rejection, a more or less stringent sampling plan can be used.

However, given their importance in the reliable operation of PV systems, more sophisticated quality checks are necessary when it comes to PV modules. Table 2 illustrates the range of tests in ISO 2859-1, including:

The number of samples to be evaluated assumes a statistical distribution of product variations. The AQL defines the confidence in accepting or rejecting a given batch of samples. For some critical tests like safety, a low AQL (such as 0.1, for example) would signify no tolerance for failures (zero-failure tolerance). In other tests, such as those used to assess visual defects like misaligned cells, higher AQLs may be acceptable. Industry standards often provide baseline pass/fail.

Note: The table shows proposed inspection level, number of samples required for each test and the number of module failures allowed following ISO 2859-1. Entries for “a)” refer to a 1MW plant, “b)” to a 10MW plant, and “c)” to a 50MW plant using 240W modules).15

UL’s own suite of test offerings include short-term quality tests as described above, as well as extended versions of each test to evaluate long-term durability or test-to-fail limits. Table 3 provides an overview and a brief description of each test as well as the PV technology to which each test is applicable.

The following sections discuss selected reliability tests for PV modules, and illustrate their potential value in assessing PV module reliability. It is important to note that, while these tests are not overly time-consuming or costly, they require the evaluation of a minimum number of samples in order to produce statistically significant results.

The flash test is an efficient way to verify the output power of PV modules within a given range of uncertainty. The uncertainty is primarily driven from the spectral response of a given PV module, the used light source and general measurement uncertainties from the calibration chain. The last uncertainty is usually constant, but the first two can result in a significant impact on absolute measurements, especially for thin film technologies.

Aside from these limitations, the flash test can be used to investigate the following areas associated with module reliability:

These three factors are critical for any valid yield estimation. To achieve even greater levels of confidence in yield estimation, it’s best to rely on measured data from the actual PV modules that will be used initial power loss of the solar cell. The average initial degradation is typically below 1% for polycrystalline cells, but could be as great as 5% for monocrystalline cells. Figure 2a illustrates the potential spread in actual values of initial power loss. However, in an installation with several thousand modules, this spread is averaged out over all of the modules.

PV modules are usually sold on the basis of their name plate rating. The Watt rating that appears on a PV module nameplate is used in conducting energy yield simulations, which means that accurate nameplates are a critical factor in achieving the energy yields predicted for a given installation. Consistent with the requirements of standards EN 50380 and UL 4730, <sup9, 10,the ratings that appear on name plates must account for all initial degradation or light soaking effects. Therefore, PV modules should be stabilized prior to measurement, and the measurement should be compared with the rating that appears on the name plate.

A second evaluation method, electro-luminescence (EL) imaging, is primarily used for crystalline silicon PV modules because there is widespread acceptance of the types of module defects that are visible using this method.11,12 There are several different types of defects that can be identified with EL imaging, each with its own root cause and performance impact. Evaluating EL images according to commonly prescribed methods can provide useful information regarding PV module reliability.

By evaluating multiple images from a single batch, it is possible to determine a general level of quality from the number and distribution of defects. An illustration of such an evaluation is presented in Figure 4. Each shipment includes the same number of modules. In shipment No. 1, only a few randomly distributed defects were identified, representing an acceptable result. However, in shipment No. 2, the number of defective modules has dramatically increased, and defects and cell cracks appear concentrated in the region I4 to J5.

Together, these observations point to a significant issue, either in the manufacturing process, the transportation of completed modules, or both. In any event, the results depicted in shipment
No. 2 are not acceptable, and further investigation is warranted to identify root causes. Additional actions could include an EL inspection of all modules prior to installation, or more frequent inspection and testing of PV systems already in operation.

At present, potential induced degradation (PID) is primarily associated with crystalline modules. Although a number of c-Si module manufacturers are now offering PV modules that are purportedly PID resistant, PID remains an unsolved problem. Efforts to address PID are further complicated by the use of different test procedures and comparability metrics, as well as a lack of data about the links between PID and recovery effects.

The focus of PID testing can vary, depending on the desired outcomes. However, some options include:

The first item on this list may seem obvious, but the additional options can provide further insights into long-term module reliability, enabling more expeditious actions to identify and address PID.

Figure 5 illustrates the results of a PID screening test of three types of modules from different manufactures. Type 1 modules show a nearly linear degradation over time with different susceptibilities. The Type 2 module shown is actually an extreme case of a Type 1 module, since it quickly reaches 100% of possible degradation and cannot degrade further over time. Type 3 modules are typically stable during the first phase of the PID test, but begin to degrade quickly once they reach a certain threshold of potential application. It is crucial to find out the general behavior (Type 1 or 3) under continuous laboratory voltage stress tests, but also to investigate recovery aspects of the module and possible system-related options.16

Since PV modules can produce such widely different results, it is important to set reasonable test parameters. Selected parameters might depend on prior knowledge of the module type or the actual scope of the test, for example, quality check or durability investigation. UL’s own default test program subjects modules to system voltage for two weeks by applying the potential via a conductive foil, resulting in a homogeneous screening of the entire module and all of its solar cells. This default set of parameters can be adjusted and customized to address the specific needs of a given project.

In an increasingly competitive marketplace, manufacturers are expected to provide customers with PV modules that meet promised performance specifications. Consistent module reliability depends on the quality and integrity of the manufacturing process, and even small variations can adversely impact the reliability of a component and compromise PV system performance. An effective, statistically-relevant reliability testing protocol can help identify modules that fail to meet design specifications, thereby providing customers with greater assurances that expected PV system performance is actually achievable. 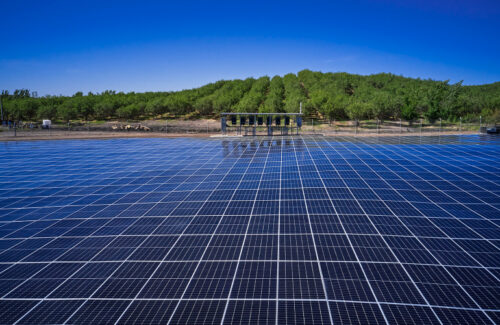